​
Evie Colville has a secret identity.
She may be a lot of things to a lot of people—dutiful daughter, loyal best friend, hard-working waitress at her father’s coffee shop, just to name a few—but one thing she absolutely isn’t is even remotely qualified to write her weekly ‘Miss Lonely Love’ column for The Sutterton Herald.
At least she doesn’t think so.
Luckily, no one but her editor, her dad, and her best friend, Grace Bryant, know Evie’s secret. The byline of her column is credited to Shara Strong, Evie’s carefully crafted, fictional alter-ego. Shara is basically Evie’s opposite. She’s definitely not an eighteen year-old senior at Sutterton High. She’s a Grown Up. And she had plenty of dating experience before she married the Man of Her Dreams. The regular readers of ‘Miss Lonely Love’ know Shara is neither a Miss nor Lonely; in her column she often mentions her handsome, perfect husband. Evie assumes, correctly, that if her readers believe she’s been so successful in love, they’ll be more inclined to trust her advice with their own problems.
Which is ironic really, because Evie is nothing of the sort. She’s never been in love. She’s not even dating. She has had a boyfriend. Once. But it wasn’t serious. Evie’s not ready for a relationship. In fact, over the past year, she’s barely thought about boys. Concentrating on her school work and her two jobs, not to mention taking care of her father and brother and squeezing in occasional time with friends—well, it doesn’t leave much room for dating.
She doesn’t mind, though. She needs to graduate at the top of her class to win a scholarship to a good college and escape this tiny town. Falling in love would only complicate things. And she doesn’t want complications.
This evening Evie sits at the counter of Colville’s Coffee Clutch, mug of hot chocolate in hand, polishing her column for Friday’s paper. She’s just finished advising a teenage girl, whom she suspects might be her brother Dylan’s friend Charlie Lancaster to stand up for herself to her controlling boyfriend.
Once Evie’s happy with her replies, she emails the document to her editor. A glance toward the clock over the door shows she still has ten minutes until she can close up.
Sometimes, if she reads a message she feels deserves a response but she’s already finished her column, she takes a few moments to send a personal reply. So tonight, with passing curiosity, she pulls the top letter from the bundle in her knapsack.
The writing is small and cramped, with jagged, crow-scratch vertical lines. She assumes it was written by a man.

Dear Miss LL,
I’ve got a messed up situation for you. What do you do when you find out the love of your life has been sleeping with your brother behind your back? You thank your lucky stars you’re free of her, right?
My problem is I can’t stop thinking about her. She stabbed me through the heart, and I left town and haven’t looked back. But the sad truth is, much as I hate myself for it, I’m still in love with her. And I’m terrified that if she apologized and groveled, I just might give in and take her back.
Now I’m not dumb enough to think that’s ever going to happen. As far as I know, she’s still with my brother, and I really don’t want to see either of them again.
So, my question for you is, how do I get over her?
Just Another Idiot

Evie purses her lips as she re-reads the letter. She’s answered questions about cheating before, but never cheating involving sleeping with two brothers at the same time, then swapping to date the other. She agrees with the writer—that’s pretty messed up.
Tapping her fingernails against the countertop, she contemplates how to reply. She tries to imagine how she might feel if she found herself in a similar situation, and how she’d want to deal with it. Tearing out a fresh sheet of paper from her notebook, she picks up her pen and starts writing.

Dear JAI,
Even though I can’t include your letter in this week’s column, I wanted to send you a personal reply.
First of all, I’m so sorry you went through that.
Second, you’re absolutely right. You should probably get down on your knees and thank some higher power that you’re free of her and get on with your life. But I know it’s not that easy. Love isn’t something you can flick off like a switch. It burrows deep inside and becomes a part of you. The only thing that might help lessen its grip is time, but I think you probably already know that.
Good on you for leaving town, though. Time and space away from them is just what you need right now. I recommend you get out and meet some people. It might surprise you how new friends can distract from old problems. Although you may not be ready yet, I also suggest you consider maybe starting to date again, even if it’s just casual.
Be strong. Someday you’ll look back on this and see that it pointed you toward the path you were meant to be on.
Best of luck!
Miss LL

Evie reads her reply over, then tucks it into an envelope and prints the local post office box return address across the front. She glances up at the clock again, and with relief sees it’s time to head home.
She packs up her things, pulls on her heavy winter coat and hat, and dims the lights. The welcome bell over the door tinkles its goodbye as she steps out and locks up.
Sutterton in mid-January after midnight is cold and still. The silence is so overwhelming Evie’s eardrums interpret it as a low roar, a crowd cheering off in the distance, a jet plane passing overhead at six hundred miles an hour. The emptiness feels absolute, with only the fading echo of the bell to ground her in reality.
White clouds of breath mar the frigid air in front of her and her boots squeak on the hard packed snow. She looks up at the clear night sky above the jagged black silhouette of the distant mountains. The stars seem to shine brighter than ever tonight, too frigid to even twinkle.
The buildings are dark, the snow is light, and the few streetlights cast long shadows. The vivid blue of the mailbox on the corner pops out of all that monochrome. When Evie reaches it, she pulls the letter from her pocket and slips it inside.
She takes a deep breath, her lungs filling with ice before hurrying along the frozen sidewalk, anxious to reach the warmth of home. 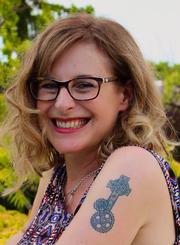